The organization which owns 25.4% of the voting rights in United’s holding company shared details at a recent meeting of members.

They also included it in the briefing emailed to members last week, as they invited comments and suggestions.

But what does the draft document contain? We’ll take a look.

The CUOSC begins the document by outlining its shareholder base, positions on the board of directors and its “mission statement”.

The latter is a three-part bulleted list that says the trust aims to 1) ensure United remain a Football League club, 2) be the voice of the fans on the board and hold directors to account, and 3) supporting or being a “critical friend” to the club and its owners and directors.

The first page also clearly indicates that any member of the CUOSC can represent a [trust] position on the board of directors or offer assistance in any capacity.

“Please come and get involved”.

Trust adds that the more fans get involved, the more the CUOSC can do for them and the louder their voice will be.

They say they welcome ideas – and add that the manifesto, inspired by the results of a 2021 questionnaire, aims to set out the trust’s “vision, core values ​​and goals”.

“The CUFC is at the heart of our community,” they say. “The 2021/22 season has demonstrated both the fragile nature of league football and the passion the fans have when we stick together.

“The CUFC and the Trust both need to improve. This manifesto forms the basis for how the Trust will improve and help build a stronger community club through better governance and broader fanbase engagement.

The CUOSC has defined eight points of interest in its manifesto.

They are the following:

Here, the CUOSC states that it will “work with Carlisle United to develop a sustainable, purposeful and community-driven football league club”.

This includes helping to celebrate the ‘heritage and culture’ of United and the region; provide a “safe and welcoming” space for everyone to enjoy football, without prejudice; maintain fair ticket pricing that also ensures “sufficient revenue for the CUFC”, “maintain and develop Brunton Park” and consult with fans on all stadium plans, “ensure an entertaining and successful first team” and “ensure facilities training adapted to our team. ”

Here, CUOSC say United “should be owned by people who believe in the club and can bring it the success and passion it deserves”.

The Trust, they add, will try to ensure that current and future owners “always act in the best interests of the CUFC”, “are sufficiently transparent about important matters affecting the operation of the CUFC”, “are engage with fans in a timely and appropriate manner”, “have a long-term vision and a sustainable plan in place that ensures the long-term stability of the CUFC”, and “possess the necessary financial resources to support the proper functioning of the CUFC , now and in the future”.

The CUOSC shared a draft manifesto with its members

The CUOSC say what happens on the pitch is the most important part of any football club, and to support this they will ‘involve where possible in the appointment of football staff and be critical where appropriate’ , “will express the opinions of fans to the CUFC Board of Directors in relation to the performance of sports staff and management”, “if possible assist in the development of a player recruitment system”, “try to ensure that the right people are held accountable for the performance of the first team”, “support the development of the CUFC academy including a path for the integration of female players into the first team” and “support the development and follow-up of the fans of the ‘women’s team’

This area sees trust highlighting the need for “meaningful and regular dialogue” between club and supporters, as a top priority.

They say CUOSC will try to ensure United ‘communicates with the fans in a meaningful way’, ‘fulfils its responsibilities for fan forums, at least twice a year’, in which the owners, directors and manager participate; “listen to the opinions of the fans and take them into account when making decisions at the board”, “publish regular updates from the board and the sporting side of the club”.

The Trust says it will also work with other supporter groups to help promote “consistency and collaboration” among as many fans and groups as possible.

The CUOSC says “all fans need to feel represented” and they will strive to make that happen.

“This means The Trust will hold regular membership meetings, at least three times a year, and encourage fans to interact and be heard; provide online access to member meetings where possible; circulating weekly emails to help keep members informed of developments within the Trust and CUFC; listen to fan opinions and act on them or provide feedback on why this is not possible; represent the views of supporters at meetings of the CUFC Board of Directors; have a clear pathway for fans to get directly involved with The Trust as a volunteer and join the board.

“Through the above,” they add, “fans can have significant influence in the boardroom and the workings of the CUFC.”

In this area, CUOSC has set out its goal to ensure that United are “free from all forms of discrimination and welcoming to everyone”.

“The Trust will work with the CUFC, supporter groups and others to ensure Brunton Park is a safe space for all and will encourage people from all communities to watch and support the CUFC, to promote respect between all people involved in the CUFC, to try to eradicate any prejudice from Brunton Park, including racism, sexism, homophobia or any other form of discrimination; support players’ decisions to demonstrate against forms of discrimination in any way they choose; advocate that the CUFC appoint the best person for the job, regardless of race, gender, or sex; strongly advocate equal opportunity for all roles at CUFC and in society at large.

In this key area, the CUOSC states that “solid financial foundations must be in place to ensure that the future of the club is not compromised”.

“The Trust will seek to ensure that CUFC is run with financial stability in mind; request that the CUFC have a long-term financial plan that is realistic in terms of potential income and expenses; ensure that CUFC continues to be open and transparent in its financial reporting systems.

“The Trust will also continue to advocate through national forums for a better distribution of funds, trying to secure more appropriate income for CUFC in the form of distributions and solidarity payments.” 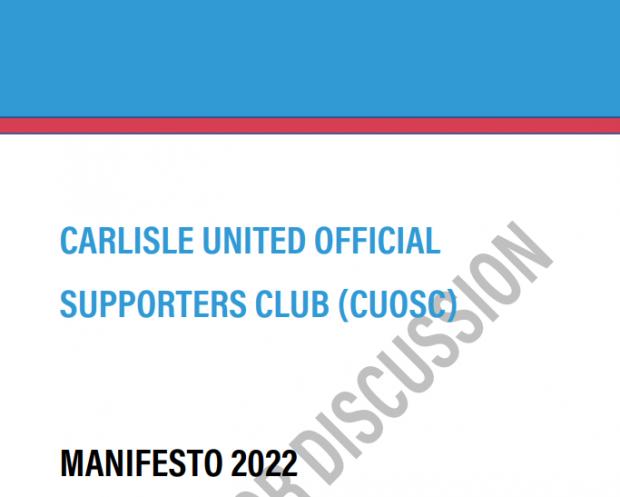 The trust’s draft manifesto was shared with members last week

This area – a hot topic in the game lately – sees the CUOSC supporting recent moves in this area.

They say the Trust supports the idea that football clubs are “community assets of cultural and historical significance, and should be managed in this way”, and that “wider football regulation needs to change, such as the pointed out the recent Fan-led Review”.

The CUOSC says it “will do what it can in the national forums to affect the changes proposed in the fan-led review; support the introduction of an independent regulator; ensuring that the club continues to be part of the Fair Game association, a group which lobbies for better distribution of income and better governance in football; and encouraging stronger and ongoing testing of owners and directors to ensure that clubs are only owned by people who understand the rich culture and history they represent.

The CUOSC said it is inviting members to provide comments and suggestions on the draft manifesto before it is officially adopted.

In the briefing to members, sent on May 15, they said they wanted responses within a fortnight, so that the changes could be completed and a final version released before the annual general meeting in July.