Works of art on display at the Angola Pavilion.

The Angola Pavilion Art Gallery at Expo 2020 Dubai hosted the collective exhibition “Tondongo, the feminine universe”, on the occasion of International Women’s Day (until March 20 ). It opened with a ceremony featuring traditional Angolan dance performances, where performers engaged with visitors.

Featuring 32 works of art in different artistic styles ranging from painting, sculpture, modelling, fabric applique, photography and performances by nine different artists, Tondongo focused on ritual traditions, female and African women of scarification. The exhibition also marked the union of different languages ​​that harmonize in a common sense of strength and creativity.

Commenting on the exhibition, curator Carla Peairo said: “We are proud to host this exhibition. The pavilion brings together artists from diverse backgrounds. “In the process, it shows the diversity and richness of contemporary art, celebrated by women. The objective of the exhibition is to create new cultural links, thus strengthening the exchange of experiences in the artistic field. Anastasie Akibode, a Frenchwoman with African roots from Cape Verde, Benin and Senegal, who presented Wired Artistic Energies, joined the exhibition; Miriam Rodriguez, born in Portugal, originally from Cape Verde and Angola, who presented the Rebirth collection; and Marcia Dias, Angolan and cultural ambassador of the Oscar Ribas Foundation, who presented the Resilience ensemble.

‘Invisible Child’ is among the winners of the Lukas Book Awards

After moving to Dubai, Akibode transitioned from a part-time artist to full-time painting in 2008. She continued her studies at the Dubai Art Center and soon after, in 2013, she received the Merit Award for Painting . Later, she attended different schools and programs in Europe and the United States. The artist has exhibited his works in several countries around the world, including the United Arab Emirates. His paintings have been featured at Art Dubai. Peairo herself is a talented artist. She is renowned for her work that incorporates motifs from traditional Angolan and African heritage and for integrating or reinterpreting them in a modern context. Her work is often created from recycled materials such as paper, fabric, burlap, cotton yarn, plastic, seashells and acrylic paint.

She shared her latest work at the pavilion during the “Conexoes” (Connections) exhibition, which also featured the works of 12 other artists.

Peairo presented expressionist artwork inspired by ‘Sona’ or Tucokwe sand drawings. The piece shows the bond that the past and the present share, as new artistic techniques are incorporated into old ancestral traditions. 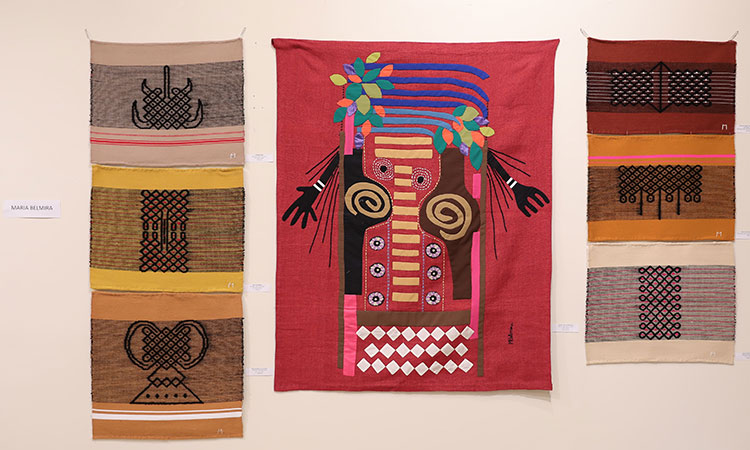 The Angola pavilion exhibits the works of women artists.

Besides Peairo, several other prominent female Angolan artists have shared their work at the Angola Pavilion gallery. Maria Belmira Gumbe is an artist who has translated the symbiosis between the traditional and the modern, with her weavings and fabric applications in an exhibition entitled “Weaving Memories”.

It was the result of many years of research and maturity and symbolized the memories of his childhood, serving as a tribute to the most important women in his life. An example of a more contemporary style was the work of Armanda Alves. She presented ‘Dinamica do Ser’ or ‘Dynamics of Being’, a collection that depicted what she believed to define the human essence, with acrylic on canvas. The works showed the artist’s vision of serenity, vitality, intensity and suspended thoughts.

Fineza Sebastiao Teta-Fisty, an accomplished and famous Angolan artist, presented ‘Nsongo’. It featured a series of chalk statues representing the different stages of pregnancy. The statues depicted different African women wearing traditional clothing, depicted at one time while performing a common daily task. The exhibition showcased the role of women in caring for their families and children.

A more futuristic example of women who showcased their work at the pavilion was Daniela Ribeiro. Her work often depicts the relationship between technology and humanity in what she calls “scientific realism”. His exhibition at the pavilion was entitled “Como Voce e Global? or ‘How are you global?’ focusing on ideas related to the field of artificial intelligence. It depicts how man has undergone a transformation from being a creation, to becoming a creator.

The Angola Pavilion has been a platform for Angolan artists, especially female artists. With the latest “Tondongo” exhibition, she has added more names to the long list of talented Angolan female artists whose work will be further shared at the Expo. The pavilion has featured works in several exhibitions by traditional and contemporary artists since the Expo began. Many of them were Angolan women artists, from diverse backgrounds and artistic styles. At the Angola Pavilion, visitors discover how the country’s history and its technological innovations are intimately linked. The pavilion focuses on the Angolan Chowke people and their relationship with the Angolan people of today, using symbols such as a large parrot called Toje, which symbolizes freedom of thought. It is also one of the symbols the pavilion uses to reintroduce the dying art of storytelling.

Culture is therefore a key element of the Angola Pavilion during this edition of the Expo. Nightly shows echo through the Expo, where musicians from all over Angola play modern and ancient music. Regular performances of traditional and contemporary dance forms are also presented, and visitors can attend workshops to learn about ancient instruments and how they are made by hand.