Art Attack: New Shows and Events This Weekend in Denver

Be happy! Check out our suggestions and plan ahead.

Eamon Ore-Giron Artist Talk and DJ Set
The Holiday Theater, 2644 West 32nd Avenue
Thursday April 28, doors at 6 p.m.
$15 MCA members, $20 non-members
Eamon Ore-Giron’s large-scale paintings homogenize modernist art movements of the 20th century to great visual effect, reflecting one minute of age-old Indigenous models, Malevich the next, and so on, in a geometric and historical soup. Compete with lightning, his show at MCA Denver, also reflects the musical waves of his mode of performance as DJ Lengua, with paintings reminiscent of the shapes and rays of Oskar Fischinger’s influential musical animations of the 1930s and 1940s, in a set of wallpapered sound installations apart from the rest of the exhibition. This talk – a conversation between MCA curator Miranda Lash and Los Jaichackers, DJ collaboration Ore-Giron and fellow artist Julio Cesar Morales – delves into this part of her practice. Bonus: Stick around after the conference for a live set from Los Jaichackers.

Untitled: Creative Fusions
Denver Art Museum, 100 West 14th Avenue Parkway
Friday April 29, from 6 p.m. to 10 p.m.
Included in museum admission
Untitled: Creative Fusions presents the theme “Voices Breaking Down Borders” at the Denver Art Museum under the direction of musician/healer and artist Bianca Mikahn and muralist Danielle SeeWalker, a citizen of the Standing Rock Sioux Tribe. The liberating evening will immerse visitors in America’s cultures of the displaced and underserved through Indigenous rituals, food, comedy, and documentation through film and imagery, as well as performances, music, therapies and black visuals. Everything is related to the museum La Malinche exhibition and its themes of cultural reappropriation.

Both Afghan and Canadian, artist Hangama Amiri draws inspiration from the culture of her hometown of Kabul for her debut at the David B. Smith Gallery. The series is dominated by intimate visual images of women’s private lives in Afghanistan’s largest city, where they suffer from limited freedoms while resiliently preserving traditions. Learn more about the work when Amiri and curator Kate Mothes chat Henna Night/Shabe Kheena during a guided tour of the exhibition.

Artists Courtney Giblin and Clark Valentine both work within the limited confines named in the title of their joint exhibition, which not only suggests a stripped-down compositional vision, but also a straightforward meditative practice. This could explain why Firehouse added a morning of yoga, meditation and kirtan (Hindu chanting) to its program for line and weight on Saturday April 30. The 10:30 a.m. yoga class is $12 and lasts one hour; the kirtan begins at 11:45 a.m. and will be followed by refreshments and a show.

An installation for Aaron Storck Ready for the future at Lane Meyer Projects.

Lane Meyer Projects at the Pon Pon Bar opens its doors to Kansas City artist Aaron Storck, whose humorous series of paintings, videos and sculptures concocts the story of a silly and mysterious oracle called the wizard Nyngxt. What will the Wiz see in your future? Some examples of fortunes include “2070—DANG” and “GOOD TIMES, 2200”. That’s all we know.

A hubcap grille by Phil Bender at Pirate.

Ursula von Rydingsvard: The Outline of Feeling
Denver Botanical Gardens, 1007 York Street
From Saturday April 30 to September 11
Screening of films and questions and answers with the artists: Ursula von Rydingsvard: herselfFriday, April 29, 6 to 8 p.m., $12-$15
Conversations with the Curators: Thursdays, May 12, June 16, July 28 and August 18, from 9:30 a.m. to 10:15 a.m., $13 to $19
The rustic practice of Brooklyn-based sculptor Ursula von Rydingsvard generates monumental works from roughly hewn cedar wood and bronze. But this indoor exhibition at the Gardens represents smaller, but no less compelling works, including cedar sculptures and early works composed of collected objects and mixed-media drawings. For more information, conversations with the curators are scheduled once a month until August.

Matt Tripodi named this show Leon 1982 for his year of birth, a hint that the work it contains is autobiographical on some level. In this case, he shows an inherent sense of in-betweenness or, as he describes it, “being caught between two disparate generations, analog and digital.” With this in mind, he used hand tools – neon, airbrush, woodburner, etc. — to create art that might put a smile on the lips of fellow millennials.

Work of samsara by Robert Davis Garner and Matt Verges.

Matt Verges offers skulls decorated with intricate ink-rendered designs and woodblock prints of creatures bound by the failing environment, and Robert Davis Garner paints portraits of characters caught in their singular worlds with no possibility of escape. Seen together, the bodies of work seem to fit together like puzzle pieces. Ongoing exhibits include Ceramic Sculpture by Penny Bidwell, through May 29, and a group exhibit by resident artists. 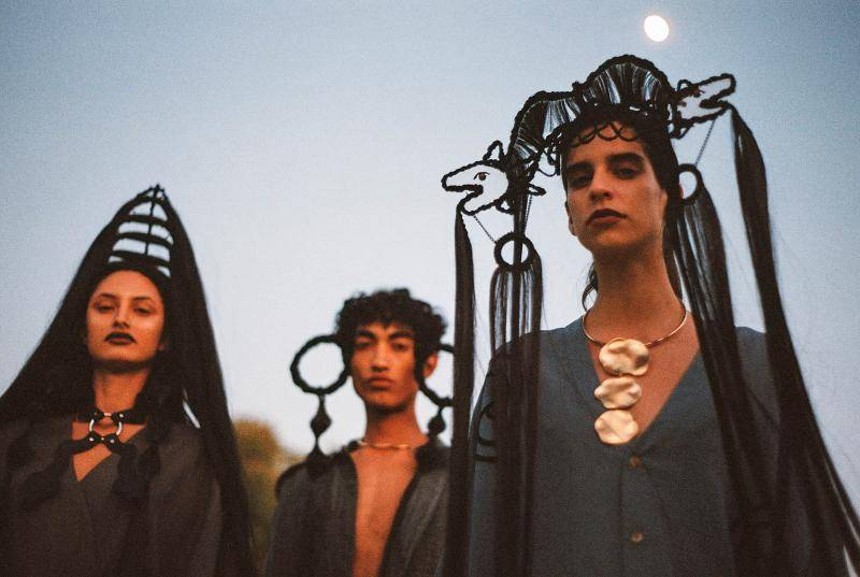 Carla Fernández, headdresses made in collaboration with Mariana Palacios, Mexico.

Mexican artist and fashion designer Carla Fernández’s couture label incorporates handmade indigenous textiles into her distinct modern outfit, going straight to the source in a traveling studio to work with master artisans. The exhibition Carla Fernandez Casa de Moda examines Fernández’s work from a variety of themes, mapping and presenting his textile sources and taking a closer look at his models, collaborations, collections and activism, to name a few.

Modern Women/Modern Vision: Works from the Bank of America Collection
Denver Art Museum, 100 West 14th Avenue Parkway
From Sunday May 1 to August 28
Anderman Photography Lecture: Sandy Skoglund, Tuesday, May 31, 6-7 p.m., $10-$20 (free for museum members)
Women have always championed their end of the photography canon: Berenice Abbott, Diane Arbus, Margaret Bourke-White, Imogen Cunningham, Dorothea Lange, Cindy Sherman and a host of others whose works are among the 100 images of Modern women/modern vision have proven this over and over again. Maybe it’s because it was easy to independently pick up a camera and start filming, but these women stand next to their male counterparts. For context, the exhibition is organized into six sections to help you navigate it, exploring female forays into photography in terms of female innovators, documentary work, Photo League (a cooperative formed in 1936), modern masters , environmental work and global objective.

Would you like your event to appear in this calendar? Send details to [email protected].