Awol Erizku, Lion (body) I, 2022. This month, the Ethiopian-American artist opened a new solo exhibition at New York’s Gagosian Gallery titled “Memories of a Lost Sphinx,” an observation of the ancient mythical figure as a metaphor for “riddles, wisdom and divinity”. (Photo: ©Awol Erizku)

Awol Erizku Reflects on “Memories of a Lost Sphinx” at Gagosian

Awol Erizku is an Ethiopian-American artist whose work draws on the vast expanse of history to create a counter-narrative to the largely Western discourse on African culture. Last week, the multidisciplinary artist unveiled a new solo exhibition at Gagosian, titled “Memories of a Lost Sphinx.”

In a black-painted interior, a series of six luminous photographs and an accompanying sculpture ruminate on the fabled Sphinx as a complex cross-cultural symbol that spans between and beyond ancient Egyptian, Greek and Asian mythologies. “My first encounter with the Great Sphinx of Giza led me to produce my own take on the mystique and essence of the sphinx as a concept. The result is my interpolation of the space between my memory and my imagination” , said the artist.

The constellation of images leaps from lions and hawks floating in the cosmos, a tarantula clutched against a man’s face, on the back of Kevin Durant’s head next to a nearby hyperrealistic portrait of a snake. Rather than presenting a singular narrative, Erizku uses this grouping to explore questions of identity as they relate to the sphinx as a hybrid symbol that embodies enigmas, wisdom, divinity, thresholds, and the transition between life and the death.

Further connecting symbols to the present, the Los Angeles-based artist illuminates the space with Nefertiti – Miles Davis (Gold) – a luminous disco ball named after the seminal musician’s 1968 album of the same name. Curated by Antwaun Sargent, “Memories of a Lost Sphinx” is on view at Gagosian New York through April 16, 2022. 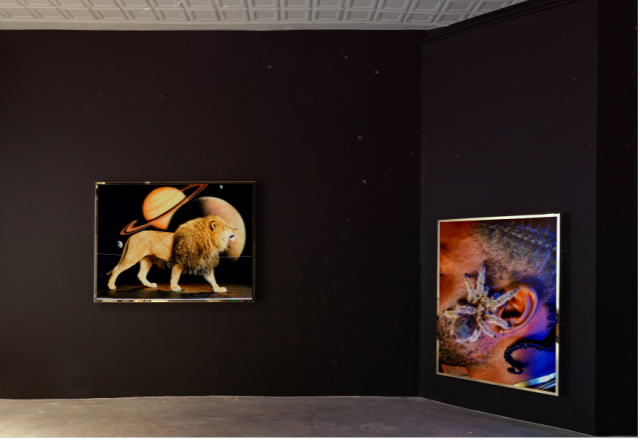 My first encounter with the Great Sphinx of Giza led me to produce my own interpretation of the mystique and essence of the sphinx as a concept. The result is my interpolation of the space between my memory and my imagination.

Gagosian is pleased to announce Memories of a Lost Sphinx, an exhibition of new works by Awol Erizku. Housed in a black-painted interior, a set of six lightbox photographs accompanied by a mixed-media sculpture depicts the sphinx as a complex, cross-cultural symbol that spans between and beyond ancient Egyptian, Greek and Asian mythologies. Curated by Antwaun Sargent, this is Erizku’s first exhibition at the gallery.

Erizku works in photography, film, sculpture, painting and installation, referencing spirituality, art history and hip-hop; in the process, he aims to create a new vernacular that bridges the gap between African and African American visual cultures. Further developing his “Afro-esoteric” iconography in Memories of a Lost Sphinx, Erizku explores the intersections of ancient mythology, diasporic tradition and contemporary culture.

The sphinx is a hybrid creature with human and animal attributes: the head of a human, the body of a lion, the wings of a falcon and, in some cases, a snake-headed tail. According to Egyptian tradition, this guardian figure had a male head, while in Greek mythology the sphinx was female and originated in Ethiopia. The most notorious Greek sphinx was defeated when Oedipus answered his riddle: “What walks on four legs in the morning, two in the afternoon, and three at night?”

Rather than conveying a singular entity or narrative, the constellation of images feature allegories of the creature’s attributes, depicting a lion pacing against a cosmic backdrop, a falcon landing on a gloved hand, a serpent tightly coiled up and a menacing tarantula. Replacing a Pharaoh’s Head is a photograph of NBA star Kevin Durant.

The grouping probes questions of meaning and identity while supplanting the body with compositions that explore the conceptual framework of the sphinx as a hybrid symbol that embodies enigmas, wisdom, divinity, thresholds and the transition between life And the dead. The images are accompanied by Nefertiti – Miles Davis (Gold), a golden mirrored disco ball in the shape of an iconic bust of the Egyptian queen. Titled after Davis’ 1968 album, the sculpture unites visual art with music, familiar symbols with new forms, and antiquity with postmodernity, while dynamically illuminating the exhibition space. . 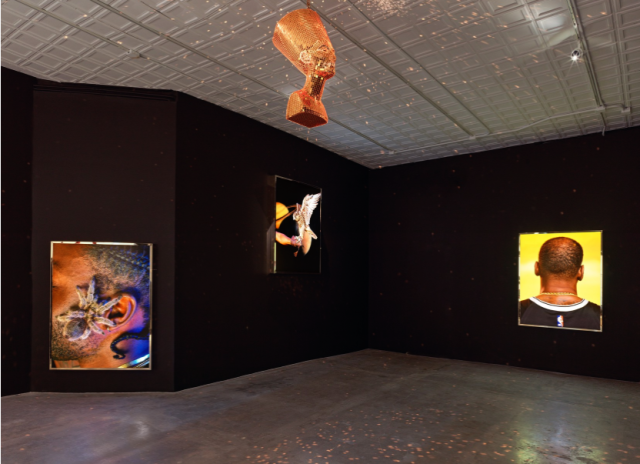 Memories of a lost sphinx can be viewed in the gallery during opening hours and at any time through its display cases, the interior-lit images and mirrored sculpture transforming the space throughout the day and night. This opportunity for public viewing of Erizku’s work extends the project for New Visions for Iris (2021), a Public Art Fund-sponsored presentation of his backlit photographs in bus shelters across the five boroughs of New York and Chicago. The lightbox format of these works also references Gregory Crewdson’s use of the format, with whom the artist studied while earning his MFA at Yale – while also referring to how the monumental Giza Sphinx is illuminated for tourists. .

If you are going to: